Persisting Problems: Will Blockchain Be Used in the Next US Election? 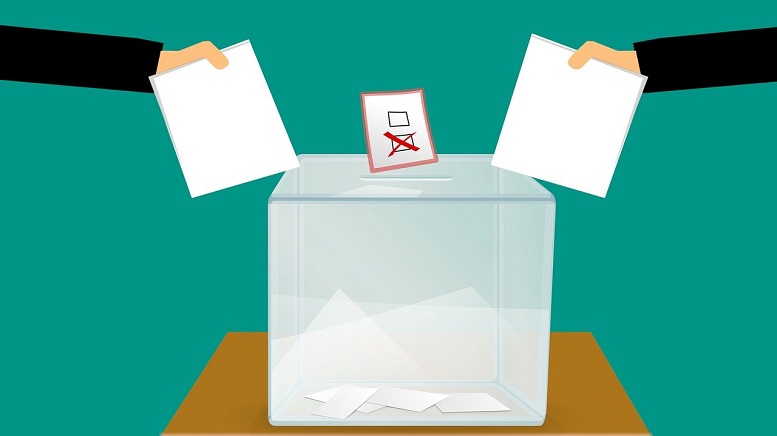 Have you ever stepped inside a voting booth, submitted your choice electronically, and wondered, “Did the vote actually go through? What if a malicious party changes my vote?” Those kinds of doubts dominate discussions about election security. As voting increasingly happens via computerized equipment, cybersecurity experts often warn how it’s easier than someone may think to hack into a system and wreak havoc.

Some people wonder then, might blockchain technology bring about a more secure way for people to vote? Let’s look at that possibility.

Presidential hopeful Andrew Yang increased awareness of the idea that blockchain technology could solve some voting security and convenience issues. One of the central points of his campaign centered on modernizing voting by letting people cast ballots through mobile apps, then the blockchain verifying them. The idea on its face sounds great, especially since many individuals don’t like the prospect of waiting in long lines and taking time out of their already-busy schedules.

Also, the Permanent Subcommittee on Investigations, which is associated with the US Senate Committee on Homeland Security & Governmental Affairs, recently held a virtual roundtable to assess the feasibility of allowing Senate members to vote via online means due to the crises caused by the COVID-19 pandemic.

Among the topics brought up were end-to-end encryption, along with a blockchain-based voting tool. The memorandum about the meeting mentioned how the blockchain could reduce instances of incorrect vote tallies by providing a tamper-free record. It also brought up how Estonia is one of the countries already using the blockchain to run entirely-online elections.

The information acknowledged, as well, that the blockchain is not a foolproof system. It discussed cryptographic errors, software bugs, and majority control of the blockchain falling into the wrong hands as possible risks. Everyone consulted during the discussion agreed with the necessity of a senator verifying their vote after casting it. The attendees discussed a variety of ways to make that happen.

We are not at the point where senators or anyone else in power is ready to approve any method of voting with help from blockchain. The fact that it’s in discussions as a viable option is a positive development, though.

Why Could the Blockchain Work Well?

Blockchain-supported voting could be a smart move because it may increase voter turnout. People often think of cryptocurrencies and the blockchain together. Younger and tech-savvier individuals often find cryptocurrency appealing due to how it keeps identities private. Plus, the idea of voting through an app attracts anyone who may experience difficulty getting to a polling station.

Plus, as the discussion above mentioned, the blockchain offers a transparent system that allows verifying a person’s votes and preventing tampering. The blockchain is not perfect, but it could give a voter more visibility to help them ensure they have their voice heard.

Many people worry about the US voting system’s vulnerability. They assert something must happen soon, or we risk compromising our democracy. Moving ahead with the blockchain for voting would give the impression of progress made.

Obstacles Associated With Voting Via the Blockchain

The blockchain is like most other technologies in that it has flaws. Some experts warn that it’s not ready for the kind of widespread usage a national election requires. Those are not unfounded concerns, either.

Earlier in 2020, MIT researchers published a report about Voatz. It’s an app claiming to record votes on a permissioned blockchain. However, the group found no evidence that the app uses the blockchain to confirm genuine votes. Even more worrisome was that the investigation revealed how a party with remote access to the app could view a person’s vote and change it.

Voatz is not the only app for voting with blockchain, but the MIT researchers showed hesitations that apply to them all. They mentioned how the people working on the apps might have good intentions but lack knowledge of election security. Also, another issue affecting the tech industry at large is that many new offerings reach the market before getting thoroughly reviewed. Companies race to be first, and security may get overlooked in that rush.

Another recent development concerns an open letter penned by experts in cybersecurity, science, and computing to address officials at all levels of government. They insist that no internet voting system has the required security, and relatedly, that blockchain cannot “mitigate the profound dangers inherent in internet voting.” The authors backed up their claims with two decades worth of science-based research.

An initiative from the Kaspersky Innovation Hub uses blockchain differently. It resulted in a blockchain-secured voting machine that lets people submit ballots in person if desired. That setup still has an online component, so it does not eliminate the concerns expressed in the open letter. Kaspersky’s invention could ease the minds of people who balk at voting through a smartphone or computer, though.

Voting with blockchain is undoubtedly on the table as an option for future consideration. Anyone excited about possibly sending their votes to the blockchain in the upcoming US presidential election likely has their hopes up far too high, however. That event is less than six months away, after all.

Something that seems more likely is that voting in many places around the country may happen differently than usual. The COVID-19 pandemic and the need for social distancing already means candidates cannot hold in-person rallies, and it’s difficult to imagine the circumstances changing enough before election day happens. People already encounter extremely long lines at polling stations, and they especially would if required to stay six feet apart.

Voting by mail seems a much more viable option to use around the nation in November, mainly since some states already use it, as do American citizens living abroad. Rolling that system out to everyone is still far-fetched due to the timing, but it’s arguably more feasible than blockchain voting as things stand now.

Coronavirus Outbreak: How Bitcoin is Faring So Far

Why Goldman Sachs is Wrong About Bitcoin

I have been enjoying making my Amazon purchases with BCH via…

Bitcoin Cash – You Are Being Lied To

Meanwhile in Argentina, BCH continues to spread because it…